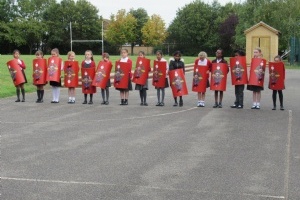 On Wednesay 12th September 2018, the Year 4 classroom was invaded!

On Wednesday 12th September, the Year 4 classroom was invaded!  We met a Roman centurion who told us about his life as a Roman soldier and how their incredibly uncomfortable and heavy armour really could save your life!  After break we stepped outside onto the battle field where each group practised their shield formation before the final battle scene.  Aftrer lunch, our Roman centurion had retired and we learnt about his life after battling for the Roman army.   We all had an enjoyable day and learnt lots of new things about the life of a Roman soldier.  To see further photos please click here